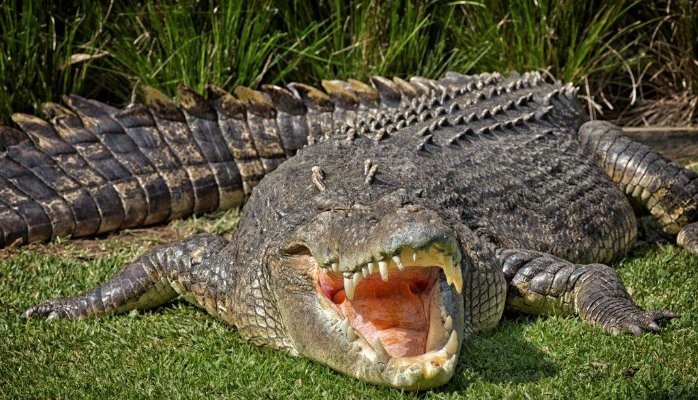 On this day in 1998, my life changed. While working as a land surveyor out in the Charleston Tea Farm (then overgrown for over 30 years and not surveyed since the 50s).

I can remember the day as if it were yesterday... I had on chest waders and snake boots carrying a machete and a prism pole. After having already killed one water moccasin that morning with my bushaxe, I was asked to take center-line shots from the middle of a long canal once used as a track for carting tea from one section of the plantation to another. It was about 6 feet deep in some sections and 8-10 in others. While attempting to cross the canal I get a crackling on the radio. "Jaybird, watch your left, there is a gator coming towards you." I thought it was a joke, but then i looked over and there sat the largest gator I have ever seen - 12-14ft. I froze. Radio again. "Shit man, there is another one coming up behind you fast!" I stepped into the water to try to cross. It was over my head and I sank with water pouring into my waders. Crew chief luckily had a shotgun in the truck. He let out a shot towards the bank and stopped both gators from coming into the water after me. I reached out of the water with my prism pole and stabbed it into the bank on the other side. Low and behold there was a third gator already in the water making its way towards me. With his last shotgun shell, he shot the water right beside me and the gator stopped. I climbed out of the canal with my life. The next day, I quit surveying and enrolled in College of Charleston and took a job as a bellman at Planters Inn. The rest is history.

This was my 2nd of 5 near death experiences over the years.

It wasn't until some years later that I began building Land Surveyors United and trying to use the power of social media to promote awareness and connectivity among surveyors...

Food for thought: If you think your job sucks, just think of what land surveyors encounter every single day to make measurements that society can rely on.

For Those Land Surveyors out there who have similar stories to share, please consider composing a short story on Land Surveyors United Surveyor Stories so we can all learn what surveying is like in your part of the world.

Do you have any particularly interesting stories about why you began or have quit surveying in the past?  We'd love for you to share them with us!
Views: 59
Tags: danger, surveying, quitting
★
★
★
★
★
Votes: 0
E-mail me when people leave their comments –
Follow
Posted by Jaybird

It is no secret that one of Land Surveyors United Community's primary missions is to help Land Surveyors Seeking Employment find surveying jobs. In fact, we help between 300-400 land surveyors become gainfully employed every year! Since 2010 we have…
See More

Singapore - (s) specializing in Quantity surveyor or equivalent. Job Descriptions To process new enquiry by generating quantity take off and costing for customized components To generate comparison in costing between initialpre-award quotat on and…
See More