In 1600 the surveyors Johan Sems (1572-before 1656) from Leeuwarden and Jan Pietersz Dou (1572-1635) from Leiden published their Practijck des lantmetens (The Practice of Surveying). From 1612 on it was reprinted several times, and always published together with *Van het gebruyck der geometrische instrumenten *(On the use of geometric instruments) by the same authors. In 1616 a German translation was published. The Practijck has a printed dedication to Prince Maurice and the States of Holland, dated ‘In Leiden, this eleventh of October AD 1600’. Van het gebruyck is dedicated to the Frisian stadholder William Louis and the States of Friesland, ‘From Leeuwarden this fifth of September AD 1600’. In their foreword ‘To the judicious readers’ both authors inform us that they do live far apart, but that the book originated from ‘our mutual friendship and daily conversations that we had together in the past, during which we have composed and written most of this book’. They also want to make their invention of ‘certain tables (called the tables of the arcs of the circle)’ more widely known. In the dedication to Prince Maurice the authors state - after an argument for the usefulness of surveying - that the Prince is very well acquainted with all this, since he himself has founded a school for engineers in Leiden. The famous mathematician and inventor Simon Stevin had composed the rules for this school, making inter alia teaching in Dutch compulsory instead of in the learned Latin language customary at the time. They continue by stating that ‘Also for the above reasons we have written our following Practijke des landtmetens, and had it printed at our own cost, as a service to our country’. The book is elaborately illustrated by tables and mathematical figures to complement the text and by a number of engravings, of which all those that are not purely mathematical have, in the Koninklijke Bibliotheek copy, been beautifully coloured by hand.

This copy is bound in a vellum binding, profusely decorated for those days, with Prince Maurice's coat of arms gold-tooled on the front and lower covers; the edge is gilded and gauffered; part of the original green ribbons have survived. It has been part of the Orange-Nassau library and will have been presented to Prince Maurice by the authors. 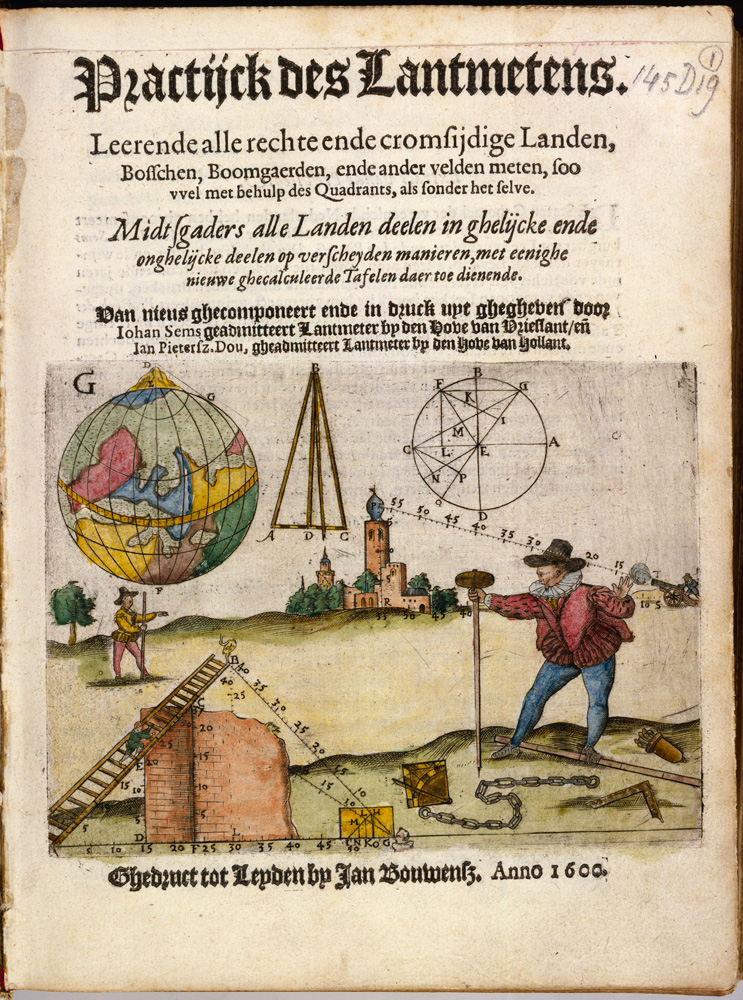