0
#surveyinghistory
1796 First American Work on Surveying Surveyor Math Mathematics Land Property
Moore, Samuel
An Accurate System of Surveying; in which is contained, I. Decimal Fractions, in a plain, concise, and easy Manner. II. The Extraction of the Square-Root. III. Plane Trigonometry, rectangular and oblique. IV. An exact Method to cast up the Contents of Lands. V. Field Surveying. The Whole being performed without the Use of Scale and Compasses, or a Table of Logarithms. In which is given, some Account of the Variation of the Needle, and the Causes of its Attraction.
Litchfield: T. Collier. 1796. First edition. x, [6], 131 [i.e., 132], [4] pp. 4to. The first American work to be published on surveying, providing an account of the mathematical principles associated with various tasks important to the surveyor. Moore was an experienced surveyor by the time he published this work, and part of the aim of this work is to provide methods superior to those in common use at the time, which Moore believed to be crude. He states in his preface that "[the] original surveys of this Country, so far as my Knowledge (from Acquaintance and Information) extends, are very confused and incorrect... the Cheapness of Lands superseding the Necessity of Precision... This, joined to the Consideration of the large Tracts of appropriated Lands belonging to the United States, renders the Art I am treating of, at this Time peculiarly important." The Treaty of Paris was less than 15 years in the past at the time of publication, and during these years a great deal of land changed ownership. Little did Moore know that less than ten years later the size of the nation would double due to the Louisiana Purchase, making this work even more timely than he had originally surmised.
Read more… 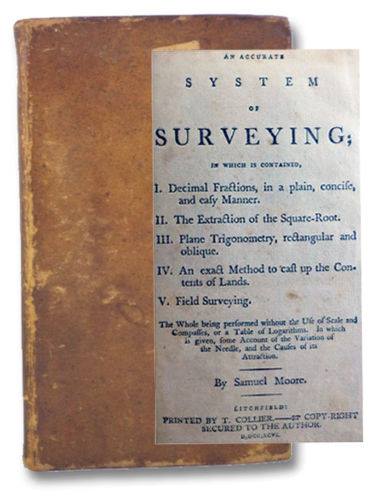