Perhaps Ronald Reagan’s most important contribution to the surveying profession was the declaration of National Surveyors’ Week, the week of March 11. Less known is Ronald Reagan’s brief surveying career and the impact it had on his life.

After Reagan’s freshman year at Eureka in 1929, the future president needed money for the next semester’s tuition. Even after working his usual summer job as a lifeguard, Reagan was still short of cash. With no prospects of paying for college, Reagan decided to drop out of Eureka in order to make some extra money.

One of Reagan’s hometown friends worked for a local surveyor and talked him into applying for a job with the local surveyor. The friend was a “high school chum,” “a rod man” for a surveying company that did work in Lowell Park, north of Dixon. Reagan’s friend advised him to quit his job as a lifeguard and apply for work on the surveying crew, which paid more money. Reagan got the job. The surveyor promised that after a year’s worth of surveying, he would pay all of Reagan’s expenses to attend the University of Wisconsin. With such a golden opportunity at hand, Reagan began his illustrious life as a surveyor.

His first day on the job, however, was also his last. He awoke that morning to torrential downfall that washed out the job. Reagan never even left for work, but instead called his girlfriend, Margaret Cleaver. The rest of the day he spent reminiscing about football and collegiate life on the campus of Eureka, reigniting his passion for the small liberal arts college. That fall he was able to work out a financial aid package with his football coach to stay at Eureka.
Naturally with all serendipitous events, Reagan would look back and wonder what would have happened if it hadn’t have rained that day. Another take on the rainstorm was that Reagan saw the hand of Providence in the downpour. Either way, he re-enrolled at Eureka, went on to be President, and never did become a surveyor.

The surveying profession came to play from time to time in Reagan’s other professions-- from movie actor to governor of California to President of the United States. As a movie star, he portrayed a few surveyors, even though his role was not of a surveyor. In the completely fictional, Santa Fe Trail, Reagan played George Armstrong Custer, who actually led a surveying crew into Native American territory. As Governor and President, Reagan naturally appointed county, state, and then federal surveyors. As P 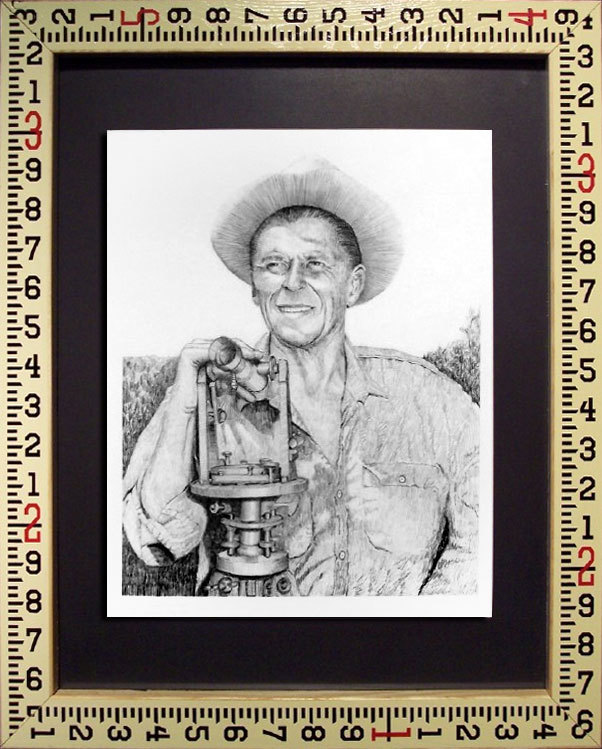