Seal of a magnetic compass.

According to Chinese writings already known in the 4th century BC and attributed to Ancient Kings. It was used for future predictions and not (yet) for determining a direction.

A kind of spoon on a bronze plate represents the constellation of Great Bear. The center circle represents the Sky and the square the Earth. The handle of the spoon points to the south, as was customary until the 18th century AD (also Europe). On the bronze plate there are directions and symbols. The combination of direction and symbol indicated by the handle would be an indication of the chance of happiness for the person who asked for this consultation. 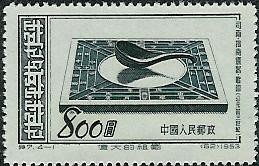