How many land surveyors does it take to design a city?  George Washington, Pierre Charles L'Enfant, Benjamin Banneker, and Andrew Ellicott, were some that have given their collective professional effort for the geometrically unique Capitol City of the United States of America, Washington, D.C.

Andrew Ellicott (January 24, 1754 – August 28, 1820) was a U.S. surveyor who helped map many of the territories west of the Appalachians, surveyed the boundaries of the District of Columbia, continued and completed Pierre (Peter) Charles L'Enfant's work on the plan forWashington, D.C., and served as a teacher in survey methods for Meriwether Lewis.

Andrew Ellicott was born in Buckingham Township, Bucks County, Pennsylvania as the first of nine children of Joseph Ellicott (1732 – 1780) and his wife Judith (née Blaker or Bleaker, 1729 – 1809).[2][3] The Quaker family lived in modest conditions; his father was a miller and clockmaker. Young Andrew was educated at the local Quaker school, where Robert Patterson, who later became a professor and vice provost at the University of Pennsylvania, was his teacher for some time. Andrew was a talented mechanic like many of the family and showed some mathematical talent, too.

In 1770, his father, together with his uncles Andrew and John, purchased land on the Patapsco River and set up a new milling business there, founding the town of Ellicott's Mills in 1772. Three years later, Andrew married Sarah Brown (1756/8 – 1827) of Newtown, Pennsylvania, with whom he would have ten children, one of which died as a child. When the Revolutionary War broke out, Andrew enlisted as a commissioned officer in the Elk Ridge Battalion of the Maryland militia despite his Quaker upbringing. During the course of the war, he rose to the rank of major, a title he would keep as an honorific throughout his life.

After the war, Ellicott returned home to Ellicott's Mills until he was appointed, in 1784, a member of the survey group tasked with extending the survey of the Mason-Dixon line that had been abandoned in 1767 and then been stalled during the war. In this survey, he worked alongside David Rittenhouse and James Madison, making first connections with the scientific society of Philadelphia.

Following the death of their second son, the Ellicotts moved to Baltimore in 1785, where Andrew taught mathematics at the Academy of Baltimore and was even elected to the legislature in 1786. The same year, he was called upon for a survey to define the western border ofPennsylvania. This "Ellicott Line" (running north-south at longitude 80°31'12" W [4]) later became the base line for the surveys of theNorthwest Territory.[5] His work in Pennsylvania intensified his ties with Rittenhouse and other members of the American Philosophical Society and led to encounters with Benjamin Franklin and Simeon De Witt. When he was subsequently appointed to lead other surveys in Pennsylvania, the family moved again in 1789 to Philadelphia. By recommendation of Franklin, Ellicott got a position with the newly established government and was tasked by George Washington to survey the lands between Lake Erie and Pennsylvania to determine the border between Western New York and U.S. territory, resulting in the Erie Triangle. This survey, during which he also made the first topographical study of the Niagara River including the Niagara Falls, gained Ellicott a reputation for superb accuracy in surveys.

From 1791 to 1792, at the request of Secretary of State Thomas Jefferson,[6] Ellicott worked under the direction of three Commissioners that President George Washington had appointed, surveying the boundaries of the federal Territory of Columbia, which would become the District of Columbia in 1801. He was assisted in this survey first by the free African-American astronomer Benjamin Banneker and then by Ellicott's brother, Joseph Ellicott. Ellicott's team put into place forty boundary stones approximately 1 mile (2 km) apart from each other that marked the borders of the Territory of Columbia of 100 square miles (260 km2) (see: Boundary Stones (District of Columbia)). Most of these stones remain in their original positions.[7] As engravings on many of the stones still show, Ellicott's team placed those that marked the border with Virginia in 1791, and those that marked the border with Maryland in 1792.[8] 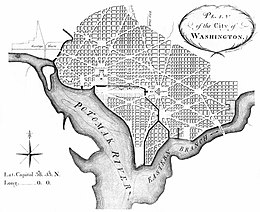 Thackara & Vallance's March 1792 print of Ellicott's "Plan of the City of Washington". 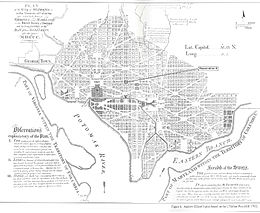 A contemporary reprint of Samuel Hill's 1792 print of Ellicott's "Plan of the City of Washington in the Territory of Columbia", showing lot numbers and legends. 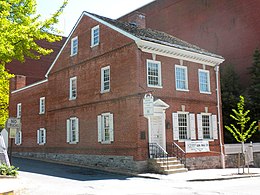 During 1791-1792, Ellicott also surveyed the future city of Washington, which was located within a relatively small area at the center of the Territory of Columbia. Ellicott also served under the Commissioners' supervision in this effort. He first worked with Pierre (Peter) Charles L' Enfant, who had prepared the initial plans for the capital city during the early months of 1791 and had presented one of these early plans to President Washington in August of that year.[9] However, L'Enfant subsequently entered into a number of conflicts with the Commissioners and others involved in the enterprise.

During a particularly contentious period in February 1792, Ellicott informed the Commissioners that L'Enfant had not been able to have the city plan engraved and had refused to provide him with an original plan that L'Enfant was then holding.[10] Ellicott, with the aid of his brother, Benjamin Ellicott, then revised the plan, despite L'Enfant's protests.[10][11][12][13][14] Ellicott's revisions realigned and straightened Massachusetts Avenue, eliminated five short radial avenues and added two others, removed several plazas and straightened the borders of the future Judiciary Square.[15][16][17][18][19]

Shortly thereafter, Washington dismissed L'Enfant. Ellicott gave the first version of his own plan to James Thakara and John Valance of Philadelphia, who engraved, printed and published it. This version, printed in March 1792, was the first Washington city plan that received wide circulation.[15]

After L'Enfant departed, Ellicott continued the city survey in accordance with his revised plan, several larger and more detailed versions of which were also engraved, published and distributed. As a result, Ellicott's revisions became the basis for the capital city's future development. When he quit the City of Washington project, Ellicott was relieved to escape the political pressures surrounding that venture.

In 1794, Ellicott accepted a commission from Pennsylvania to plan the city of Erie. He spent the next two years with this task, plotting a road from Reading, Pennsylvania toPresqu'Isle, where the city was to be built, and supervising the construction of Fort Erie.

In 1796, George Washington commissioned Ellicott as the U.S. representative on the commission for the survey of the border between the Spanish territories in Florida and the United States negotiated in the Treaty of San Lorenzo. Ellicott travelled with a military escort via the Ohio and Mississippi rivers and worked together with Spanish commissioners, despite many difficulties, for the next four years. Another "Ellicott's Line" from this survey, running along latitude 31°N, still defines the border between Alabama and Florida.[20] One of his markers for the boundary line survives to this day and bears his name, Ellicott's Stone. In 1798, he complained to the government about four American generals receiving pensions from Spain, including General James Wilkinson. Ellicott showed considerable diplomatic talent during this joint project to bring it to a successful completion, and he presented his final report with maps to the government in 1800.

The Adams administration, however, then refused to pay Ellicott for his work done in this survey, and even refused him access to his maps he had submitted with the report. He was forced to sell some of his possessions, including books from his library, in order to support his family. Finally the maps were released in 1803, and Ellicott published his Journal of Andrew Ellicott detailing the Florida survey, including the maps. When Thomas Jefferson offered him the post of Surveyor General, Ellicott turned him down. His prior negative experiences with the administration may have had something to do with this, but at the age of 49, he also wanted to spend more time with his family and feared that this new position might require him to travel too much. Instead, he accepted an offer by Pennsylvania governor Thomas McKean and took a position as Secretary of the Pennsylvania Land Office. The family moved to Lancaster, Pennsylvania, and Ellicott seemed content with a clerk's job that left him enough time for his own scientific and private interests and that provided a steady income for the family.

Also in 1803, Jefferson engaged Ellicott as a mentor and teacher for Meriwether Lewis, one of the leaders of the Lewis and Clark Expeditionthat was to start the following year. From April to May 1803, Lewis stayed at Ellicott's home and studied survey techniques, and Ellicott made many recommendations on the expedition's equipment and survey procedures that were later followed. The two men apparently got along well.

When Simon Snyder followed McKean as governor of Pennsylvania, he fired Elliott in 1809 due to political differences. A prominent supporter of Snyder was General James Wilkinson, one of the four generals that Ellicott had denounced eleven years earlier. Ellicott returned to private practice and was hired in February 1811 by David B. Mitchell, then governor of Georgia, to re-survey the border between Georgia and North Carolina to settle a border dispute between these two states. Although he started out in July, his expedition was delayed and had to work throughout the hard winter. Ellicott confirmed earlier findings that the border, which was supposed to follow latitude 35°N, was several miles further south than the Georgians claimed. His report was not well received by the Georgian administration, who furthermore refused to pay his fees. Ellicott returned in July 1812 to Pennsylvania.

In 1813, Ellicott accepted a position as a professor for mathematics at the military academy at West Point, and the family left Lancaster and moved to West Point, New York. In 1817, Ellicott was again called upon to participate as astronomer in a field survey to establish the western border between Canada and the United States, which had been defined after the War of 1812 in the Treaty of Ghent to run alonglatitude 45°N. It was the last significant survey that he performed. Ellicott died three years later from a stroke in his home at West Point.