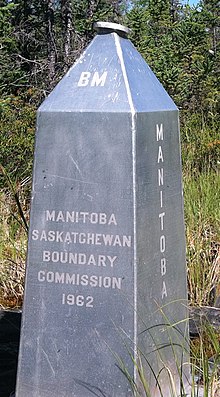 This monument marks the north end of the Second Meridian 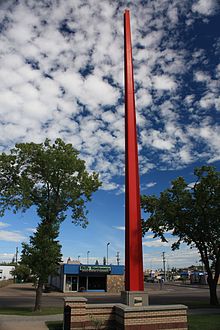 A border marker in Lloydminster

The most important north–south lines of the survey are the meridians:[9]

The meridians were determined by painstaking survey observations and measurements, and in reference to other benchmarks on the continent, but were determined using 19th century technology. The only truly accurate benchmarks at that time were near the prime meridian in Europe. Benchmarks in other parts of the world had to be calculated or estimated by the positions of the sun and stars. Consequently, although they were remarkably accurate for the time, today they are known to be several hundred metres in error. Before the survey was even completed it was established that for the purposes of laws based on the survey, the results of the physical survey would take precedence over the theoretically correct position of the meridians. This precludes, for example any basis for a boundary dispute between Alberta and Saskatchewan on account of surveying errors.

The main east–west lines are the baselines. The First Baseline is at 49° north, which forms much of the Canada–United States border in the West. Each subsequent baseline is about 24 miles (39 km) to the north of the previous one,[10] terminating at 60° north, which forms the boundary with Yukon, the Northwest Territories, and Nunavut. 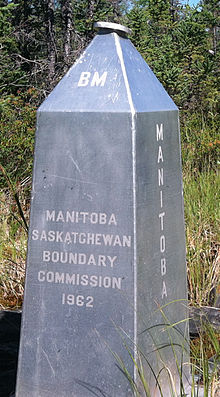