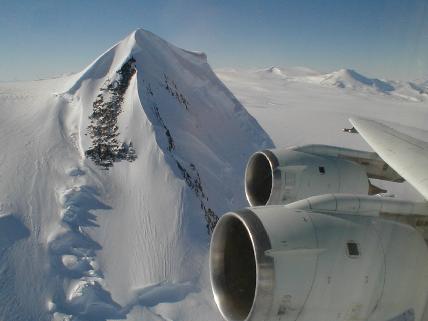 Researchers are flying a suite of scientific instruments on two planes from a base of operations in Punta Arenas, Chile: a DC-8 operated by NASA and a Gulfstream V (G-V) operated by the National Science Foundation and the National Center for Atmospheric Research. The G-V will fly through early November. The DC-8, which completed its first science flight Oct. 12, will fly through mid-November.

Ninety-eight percent of Antarctica is covered in ice. Scientists are concerned about how quickly key features are thinning, such as Pine Island Glacier, which rests on bedrock below sea level. Better understanding this type of change is crucial to projecting impacts like sea-level rise.

"With a third year of data-gathering underway, we are starting to build our own record of change," said Michael Studinger, IceBridge project scientist at NASA's Goddard Space Flight Center in Greenbelt, Md. "With IceBridge, our aim is to understand what the world's major ice sheets could contribute to sea-level rise. To understand that you have to record how ice sheets and glaciers are changing over time."

IceBridge science flights put a variety of remote-sensing instruments above Antarctica's land and sea ice, and in some regions, above the ocean floor. The G-V carries one instrument: a laser-ranging topography mapper. The DC-8 carries seven instruments, including a laser altimeter to continue the crucial ice sheet elevation record begun by the Ice, Cloud and land Elevation Satellite (ICESat) mission, which ended in 2009. The flying laboratory also will carry radars that can distinguish how much snow sits on top of sea ice and map the terrain of bedrock below thick ice cover.

A gravimeter aboard the DC-8 will detect subtle differences in gravity to map the ocean floor beneath floating ice shelves. Data on bathymetry, or ocean depth, and ocean circulation from previous IceBridge campaigns are helping explain why some glaciers are changing so quickly.

Flights take off from Punta Arenas and cross the Southern Ocean to reach destinations including West Antarctica, the Antarctic Peninsula and coastal areas. Each lasts 10 to 11 hours.

"We will be re-surveying our previous flight lines to see how much glaciers and ice sheets have changed, and we'll cover new areas to establish a baseline for future years and the ICESat-2 mission in 2016," Studinger said.

Early high-priority DC-8 flights include several flight lines over sea ice near the Antarctic Peninsula, before too much of the ice melts in the southern spring. IceBridge sea ice flights are designed to help scientists understand why sea ice in the Southern Hemisphere is not following the steady decline of sea ice thickness and extent seen in the Arctic.

Other high priority flight lines follow ground traverses being made this year and next, during which NASA scientists will travel different sections of the West Antarctic Ice Sheet, measuring snowfall accumulation and the characteristics of Pine Island Glacier.

Many flight lines will retrace either previous ICESat-1 tracks or future ICESat-2 tracks. Some also will align with current observations made by the European Space Agency's CryoSat-2 satellite. The overlapping flight lines and satellite tracks ultimately will help scientists improve the accuracy of their data.