Survey Earth in a Day

Finds the exact point that lies halfway between two or more places. Find your personal center of gravity--the geographical average location for all of the places you have lived in. See the results on a Google Map.  Using the calculator  FAQ 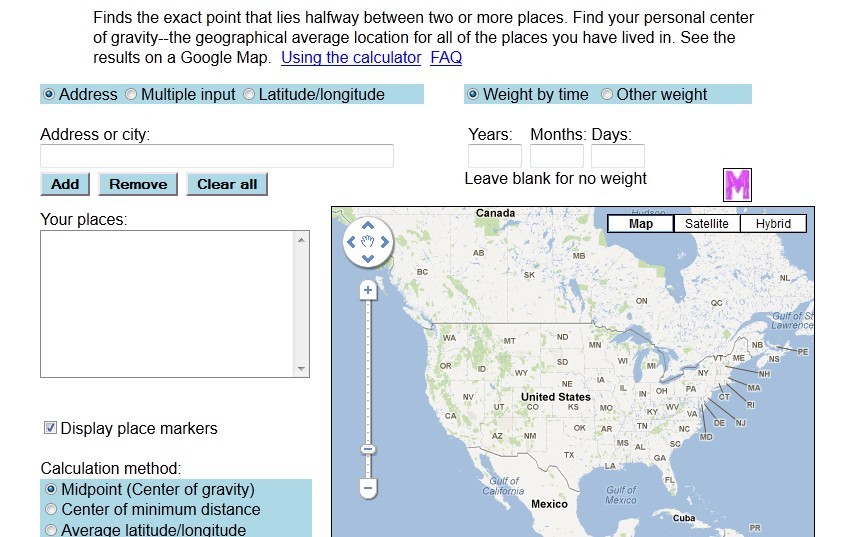 Here are a few of the many possible uses for the calculator:

Locations can also be specified by latitude and longitude using one of the allowed formats.

Weight by time and other weight

You can use 'Weight by time' to weight your places for the personal center of gravity calculation. Enter the amount of time you have spent in each place. If you leave the years, months, and days boxes blank then all of your places will be weighted equally for the calculation. As an alternative, you can use 'Other weight' to enter population or other weighting factors for each location.

Three different calculation methods are available for calculating the midpoint, each of which is useful in different situations. There are reasons for choosing one method over another.

How the calculator works

To help visualize the concept of center of gravity, imagine that a small weight is positioned at the location of various cities on a world globe. Now imagine that the globe is allowed to rotate freely until the most heavily weighted part of the globe is pulled by gravity until it is facing downward. The lowest (and heaviest) part of the globe is the center of gravity and the geographic midpoint for all of the weighted cities. See Calculation methods for a detailed description.

A lot of distortion occurs when the earth is projected onto a flat surface, for instance, a map using the Mercator Projection. Because of this distortion, if you plot two points on a flat map along with the corresponding calculated midpoint, you will find that the midpoint is often far out of alignment with the two points. This can be easily illustrated by an example. If you place a ruler on a flat wall map between Phoenix, Arizona and Kabul, Afghanistan, the midpoint for the two cities will appear to be in the Atlantic Ocean a few hundred miles off the tip of Portugal. However, the Geographic Midpoint Calculator gives the true midpoint coordinates of latitude 88.9300 North longitude 171.1427 West, which is 72 miles (116 km) from the North Pole. You can verify this by stretching a string between the two cities on a world globe.

In general, a true midpoint in the Northern Hemisphere will be farther north than you might expect it to be when viewed on a flat map, and conversely, a true midpoint in the Southern Hemisphere will be farther south than you might expect it to be. For cities that are close together this apparent difference between a spherical earth and a flat map is only slight, but the difference can be great for cities with a lot of longitude separation, such as cities on different continents. Also, there tends to be more distortion in the polar regions than near the equator. So if your calculated midpoint is farther north than you expect it to be, this is the explanation. Usually, if you take a look at a world globe it will begin to make sense.