FREEDOM OF THE PRESS,

Dingo is a small town located just across the railway line from the Capricorn Highway near Rockhampton in Queensland, Australia. The origin of the town’s name is shrouded in mystery – some say a railway surveyor saw a dingo on the creek bank and gave the town its name whilst others say that Moses Wafer, an early pioneer, heard dingo’s howling at night and named the town after his camp site.

A bronze statue of a Dingo is in the town commemorating the town’s name. This busy town sits on two major highways that service the beef, mining and coal industries. Up to 1,000 vehicles pass through in one day, and it’s not unusual to see 10 triple road trains outside the roadhouse.

There is accommodation at the cattle station, where you can horse ride and muster. Dingo also holds the annual World Championship Dingo Trap Throwing and Picnic Races in July. For more information, just ask at the 24 hour service station on the Highway, such was the sleepy hollow in the mid 1960’s where my story begins.

So much for the introduction of the Town of Dingo 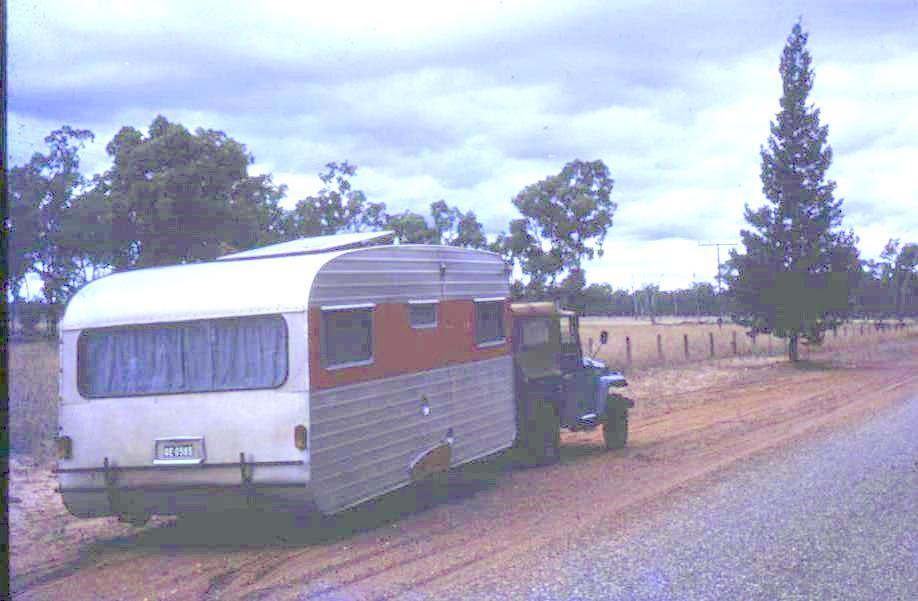 Early in my career I was asked to do a circuit of surveys by the Main Roads Department, which brought us to Dingo – a survey on the Fitzroy Developmental Road about 5 km out of town.  We were trialling a new caravan the proudly designed by my Master Surveyor himself and custom built in Brisbane.  It had all the bells and whistles one could ask for as caravans go.  We had a short wheel-base Toyota Landcruiser to tow it with. 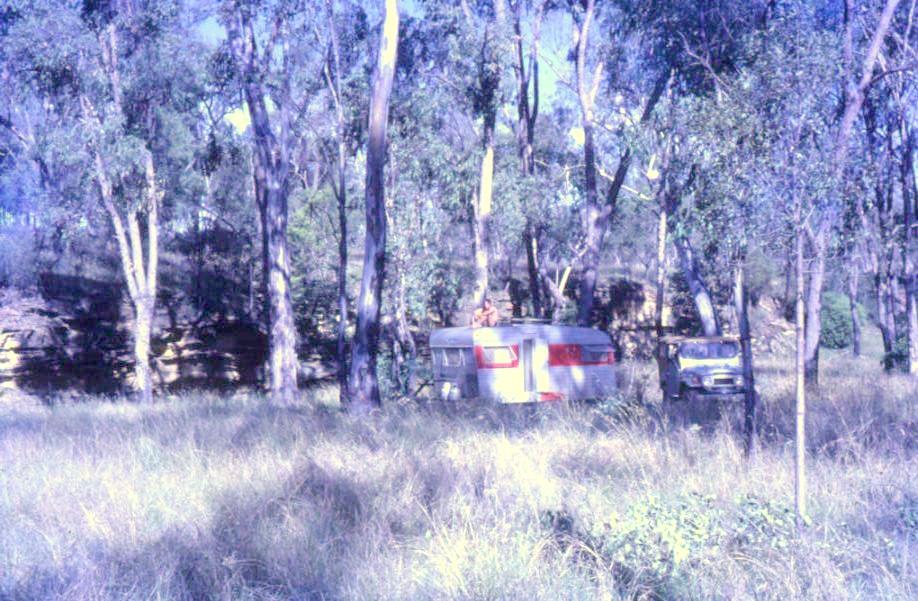 We, myself and Mike Grabbe a surveying cadet/chainman had setup camp on the far side of a picturesque creek from the Fitzroy Developmental Road and contently did our work.  One afternoon we could see those tell-tale storm clouds rolling in, downed tools and decided to move the caravan back to the road side of the creek as a precaution as one would.  Before we did so, a road train truck passed by leaving Dingo and blew his horn to say G’day to us, as they do in the bush.

Well the storm hit just as we got across the creek and parked the caravan into the wind.  We could see the hatch on the top being forced open by the wind, so we jumped inside the caravan and literally hung on the hatch to force it shut.  Then it happened.  Suddenly the wind changed course and the caravan started to rock and over it went with us inside.  Flour, eggs, food, plates from the storage above came flying down; as we had put our feet through the windows and would you know it and the caravan door was under us.  What a mess…  We had to break the back window to get out.  Before we could get the caravan upright the same road train truck passed by and was able to get into Dingo through the swollen creek.  We righted the caravan, looking at it, the inside and outside of the caravan were a mess; how could we tell the Master Surveyor his Masterpiece was still towable but that was all.  We waited a couple of days till the floods abated and the creeks along the road to Dingo had gone down before we braved our return to town to phone the boss.  In town we need some Dutch courage as you can imagine, so while talking about the storm in the pub, the guy beside me showed me the local paper with a story how the storm had blown the surveyors’ caravan from one side of the creek to the other as told by the truck driver - Talk about Freedom of the Press.

Des, the Boss never saw the funny side of things.