Hp prime,Step 2, Into the Time Machine

Hi Everyone,Step into the Future first ,then we will step back into the Past with this calculator.Like i have already said ,this is not just a calculator,Like you have used in the past,because this one will put you in the future,then take you back into the past because of it programming , the HP PP language.So set back and read how we can do this. The HP Prime is a graphing calculator manufactured by Hewlett-Packard (HP). It contains features common in smartphones, with a touchscreen and apps available to put onto it.[5] There are two sides to the calculator, a numeric home screen and a computer algebra system (CAS) home screen. The calculator can quickly switch between the two, unlike its competitors, which either have a CAS model or a non-CAS model. The CAS is based on the free and open-source Xcas/Giac 1.1.2 engine by Bernard Parisse, who was also the main developer of the CAS system integrated into the HP 49G and successors. The calculator has a 1500 mAh battery, which is expected to last up to 15 hours on a single charge. Prime emulator PC software is available as well. It has also, for now (2016), taken the title for the world's smallest CAS calculator at 18,23×8,58 cm and is also the thinnest CAS calculator available currently, with a thickness of only 1.39 cm.

The HP Prime has a feature called Exam Mode. This enables various features of the calculator (such as CAS functionality, user-created apps, notes, etc.) to be selectively disabled for a specific time, from 15 minutes to 8 hours. This can be done manually within the calculator's menus, or by using a computer with HP's connectivity software.[6] LEDs on the top of the calculator blink to let the instructor see that the calculator is in this mode. Despite this feature, the Prime is still prohibited in many examinations, such as the US's ACT college-entry test.[7] It is however starting to be accepted in other examinations, like those run by the Dutch CvTE,[8] the Swiss IB,[9] or Alberta (Canada)[10] education authorities.

The HP Prime's non-CAS home-screen supports textbook, algebraic and 128-level RPN (aka Advanced RPN) entry logic. However, it uses a new operating system unrelated to HP's legacy Saturn and Saturn-emulated systems, which were used on HP's previous RPN/RPL graphing calculators; therefore, it is not compatible with any User RPL or System RPL or with programming in Saturn or ARMv4T assembly language.

The calculator supports programming in a new, Pascal-like programming language now named HP PPL (for Prime Programming Language, but originally also referred to as HP Basic) that also supports creating apps. This is based on a language introduced on the HP 38G and built in on subsequent models. All of this is the Furture of what calculators are starting to become,they are now more like Math Computers ,than they are calculators.They are just evolveing with the times,in some cases they are moving into the Future .
So how can this calculator take you into the past,Like what has aready been pointed out above,that this calculator programming is not compatible with RPL or RPL system or with programming in Saturn or ARMv4T assembly languages that includes RPN. Just like the RPL calculators that Ran in RPN mode,they still could not do RPN programming ,also the Prime can Run in RPN mode, but cannot do RPN programming. RPN Keystroke programming ,“Keystroke” is the HP equivalent to Microsoft’s “macro”.So with the help of Eddie Shore, He has wrote in HP PPL, Two programs that work in “program” mode. This mode enables the Prime to write and store a series of keystrokes for future use. It’s like a macro in Microsoft Excel. To access programs You use Tool Box,then User Program Function . To write the macro you use editmacro in ***Edit Mode***, to Run the programs you use Tool Box, user Program functions, runmacro (macro name) ,These are like keystoke RPN
Programs that has been used in the Past .The RPL calculators could not do this. So with these two Macro programs you can write and run Two different calculator languages. on the HP Prime, So the language of the Future,will take you back to the Past. Although This is familiar type RPN language,there are some differences.The label is the macro name,LBL 1,2,3 etc. are use as path ways and GTO instructions, You press Enter before you type the constants,Your answers will end on the 4 level stack RPN that you are use to ,but you will see all 4 levels, T,Z,Y,X, so you write the program to end with the possibility of 4 answers at one time,there is no Run/Stop key. What you come up with is a program language that looks like a mixture of RPN from Friden logic system,up to present day. I call it ESN,Eddie Shore Notation, I am sure Eddie would like that, Eddie Shores has been good enough to write these two HP PPL programs and include instructions on how to use them and with your keystrokes and commands.To get these Two programs you must go to MOHPC and view there HP Prime Software Library, page 3, and find Eddie Shore, editmacro,runmacro, 3,9,2015 update, then down load the file. In this file is three folders a Read me,editmacro and runmacro The Read me is where you will find instructions and example's and everything else you need,you must be a member to download these files.So if you are not ,then apply for membership. Then you are on your way to the future and the Past,with this Time Machine.These are not survey programs,they let you write your own RPN programs no matter what they are. So all you old timers step into the Future and you new Surveyors come out of the future and step into the past.With this amazing calculator. HP PRIME.
These programs must be downloaded and installed with the Prime HP Connectivity Kit.

Here are some links that you will need.

And you may able to just download from here,but advise to read Eddie page for this download @MOHPC 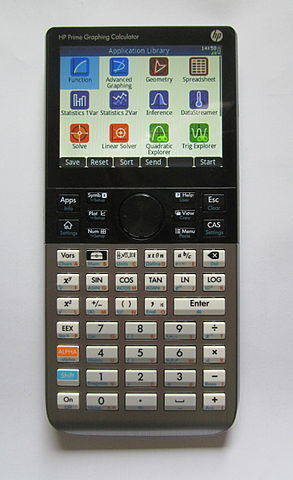 Once you have the programs on the calculator you are ready the to start,Learning how this New RPN works in macro. So go to Eddie's Read me and look at the first program you will write. these programs will not run in RPN mode, I use Textbook,when doing these programs, that seems to work best, the first macro is area of a circle, these program lines are wrote in "string", but number input is not entered as a"string",So remember this, numbers are not in "strings".then run from program  catalog editmacro or from tool box, user program function, select edit macro Enter, then you will be in ***Edit Mode*** and you can start your program. most of my program i also use DEG mode for my angles, so i set the program in DEG mode,by making it my first line. If your solution needs to be in Radians then do not do this, this is just to make sure i am in Degree mode. So your first line will be 1. "DEG" this program looks like this. as you will see.

Now you have to name it, so type macro01:= high lite the program line and press ENTER,ENTER,and you will be asked do you want to create a variable  in this name, then press   OK, and you just made your first

macro name macro 01, Now how to run it, Go tool box,user program functions,runmacro, then to vars, user variables macro01 and it will look like this runmacro(marco01) ,then ENTER ,your program will start,you will see a input line type 15 then OK, then you will see the *** STACK***,T,Z,Y,X, in x line your answer 706.858347058, and that is the area of that circle. So stay tune.