Ever wonder how Washington D.C. was envisioned by those who designed the layout of the streets?

From Wikipedia, the free encyclopedia

Pierre (Peter) Charles L'Enfant August 9, 1754 – June 14, 1825) was a French-born American architect and civil engineer best known for designing the layout of the streets of Washington, D.C..

L'Enfant was born at Anet, Eure et Loire, the third child and second son of Marie Charlotte L'Enfant (aged 25 and the daughter of a minor marine official at court) and Pierre L'Enfant (1704–1787), a painter with a good reputation in the service of King Louis XV. In 1758, his brother Pierre Joseph died at the age of six, leaving him the eldest son. He studied at the Royal Academy in the Louvre before enrolling to fight in the American Revolution.

L'Enfant was recruited by Pierre Augustin Caron de Beaumarchais to join in the American Revolutionary War in the American colonies. He arrived in 1777 at the age of 23, serving as a military engineer in the Continental Army with Major General Lafayette.[1] Despite his aristocratic origins, L'Enfant closely identified with the United States, adopting the name Peter.[2][3] He was wounded at the Siege of Savannah in 1779, but recovered and served in General George Washington's staff as a Captain of Engineers for the remainder of the Revolutionary War. During the war, L'Enfant was with George Washington at Valley Forge. While there, Marquis de Lafayette commissioned L'Enfant to paint a portrait of Washington. L'Enfant was promoted by brevet to Major of Engineers on May 2, 1783 in recognition of his service to American liberty.[4]After the war, L'Enfant designed the badge of the Society of the Cincinnati, shaped as an eagle, at the request of Washington, and was sent to France to give the badges to French officers who fought in the war.[5]

Following the war, L'Enfant established a successful and highly profitable civil engineering firm in New York City. He achieved some fame as an architect by redesigning the City Hall in New York for the First Congress in Federal Hall.[6] He also designed coins, medals, furniture and houses of the wealthy, and he was a friend of Alexander Hamilton.

In 1789, when discussions were underway regarding a new federal capital city for the United States, L'Enfant wrote to President Washington asking to be commissioned to plan the city. However, any decision on the capital was put on hold until July 1790 when Congress passed theResidence Act.[7] The legislation, which was the result of a compromise brokered by Alexander Hamilton and Thomas Jefferson, specified the new capital be situated on the Potomac River, at some location between the Eastern Branch (the Anacostia River) and the Connogochegue, near Hagerstown, Maryland. The Residence Act gave authority to President Washington to appoint three commissioners to oversee the survey of the federal district and "according to such Plans, as the President shall approve," provide public buildings to accommodate the Federal government in 1800.[8][9]

President George Washington appointed L'Enfant in 1791 to design the new capital city (later named the City of Washington) under the supervision of three Commissioners, whom Washington had appointed to oversee the planning and development of the ten-mile square of federal territory that would later become the District of Columbia. Thomas Jefferson, who worked alongside President Washington in overseeing the plans for the capital, sent L'Enfant a letter outlining his task, which was to provide a drawing of suitable sites for the federal city and the public buildings. Though Jefferson had modest ideas for the Capital, L'Enfant saw the task as far more grandiose, believing he was not only locating the capital, but also included devising the city plan and designing the buildings.[10]

L'Enfant arrived in Georgetown on March 9, 1791, and began his work, from Suter's Fountain Inn.[11] Washington arrived on March 28, to meet with L'Enfant and the Commissioners for several days.[12] On June 22, L'Enfant presented his first plan for the federal city to President Washington.[13][14][15] On August 19, he appended a new map to a letter that he sent to the President.[14][16]

President Washington retained one of L'Enfant's plans, showed it to Congress, and later gave it to the three Commissioners.[17] The U.S.Library of Congress now holds both the plan that Washington apparently gave to the Commissioners and an undated anonymous survey map that the Library considers L'Enfant to have drawn before August 19, 1791.[17][18] The survey map may be one that L'Enfant appended to his August 19 letter to the President.[19]

L'Enfant's "Plan of the city intended for the permanent seat of the government of the United States..." specified locations for the "Congress house" (the Capitol), which would be built on Jenkins Hill, and the "President's house" (the White House), which would be situated on a ridge parallel to the Potomac River.[20] L'Enfant envisioned the President's house to have public gardens and monumental architecture. Reflecting his grandiose visions, he specified that the President's house would be five times the size of the building that was actually constructed.[10]Emphasizing the importance of the new nation's legislature, the Congress house would be located on a longitude designated as0:0.[21][22][23][24][25]

The plan specified that most streets would be laid out in a grid. To form the grid, some streets would travel in an east-west direction, while others would travel in a north-south direction. Diagonal avenues later named after the states of the union crossed the grid.[25][26][27] The diagonal avenues intersected with the north-south and east-west streets at circles and rectangular plazas that would later honor notable Americans and provide open space.

L'Enfant laid out a 400 feet (122 m)-wide garden-lined "grand avenue", which he expected to travel for about 1 mile (1.6 km) along an east-west axis in the center of an area that would later become the National Mall.[26] He also laid out a narrower avenue (Pennsylvania Avenue) which would connect the Congress house with the President's house.[21][26] In time, Pennsylvania Avenue developed into the capital city's present "grand avenue".

L'Enfant's plan additionally laid out a system of canals (later designated as the Washington City Canal) that would pass the Congress house and the President's house. One branch of the canal would empty into the Potomac River south of the "President's house" at the mouth of Tiber Creek, which would be channelized and straightened.[26]

L'Enfant secured the lease of quarries at Wigginton Island and along Aquia Creek in Virginiato supply stone for the foundation of the Congress house in November 1791.[28] However, his temperament and his insistence that his city design be realized as a whole, brought him into conflict with the Commissioners, who wanted to direct the limited funds available into construction of the federal buildings. In this, they had the support of Thomas Jefferson. 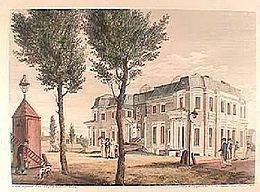 During a contentious period in February 1792, Andrew Ellicott, who had been conducting the original boundary survey of the future District of Columbia (see: Boundary Stones (District of Columbia)) and the survey of the federal city under the direction of the Commissioners, informed the Commissioners that L'Enfant had not been able to have the city plan engraved and had refused to provide him with the original plan (of which L'Enfant had prepared several versions).[29] Ellicott, with the aid of his brother, Benjamin Ellicott, then revised the plan, despite L'Enfant's protests.[29][30] Shortly thereafter, Washington dismissed L'Enfant. After L'Enfant departed, Andrew Ellicott continued the city survey in accordance with the revised plan, several versions of which were engraved, published and distributed. As a result, Ellicott's revisions subsequently became the basis for the capital city's development.[31][32][33][34]

L'Enfant was initially not paid for his work on his plan for the federal city. He fell into disgrace, spending much of the rest of his life trying to persuade Congress to pay him the tens of thousands of dollars that he claimed he was owed. After a number of years, Congress finally paid him a small sum, nearly all of which went to his creditors.[3] In 1792 L'Enfant designed Robert Morris mansion in Philadelphia which was never finished after Morris bankruptcy. In 1812, he was offered a position as a Professor of Engineering atUnited States Military Academy, but he declined that post. {Ironically Ellicott served as a Professor of Engineering at West Point from 1813 to 1817} In 1814, L'Enfant worked briefly on the construction of Fort Washington on the Potomac River southeast of Washington, D.C., but others soon replaced him.[35]

L'Enfant died in poverty. He was buried at the Green Hill farm in Chillum, Prince George's County, Maryland. He left behind three watches, three compasses, some books, some maps, and surveying instruments, whose total value was about forty-six dollars.[36]

In 1901 and 1902, the McMillan Commission used L'Enfant's plan as the cornerstone of a report that recommended a partial redesign of the capital city.[33] Among other things, the Commission's report laid out a plan for a sweeping mall in the area of L'Enfant's widest "grand avenue", which had not been constructed.

At the instigation of a French ambassador to the United States, Jean Jules Jusserand, L'Enfant's adopted nation then recognized his contributions. In 1909, after lying in state at theCapitol rotunda, L'Enfant's remains were re-interred in the Arlington National Cemetery in Virginia, on a hill overlooking the city that he had partially designed.[37][38] In 1911, he was honored with a monument placed on top of his grave. Engraved on the monument is a portion of L'Enfant's own plan, which Andrew Ellicott's revision and the McMillan Commission's plan had superseded.[39]

L'Enfant was initiated into Freemasonry on April 17, 1789 at Holland Lodge No. 8 F&AM which was chartered in 1787 by the Grand Lodge of New York F&AM. L’Enfant had been in New York City since the preceding year, as he supervised renovations to Federal Hall, where the inauguration was to take place. Holland Lodge No. 8 still exists today.[40][41]